Sign up to hear about upcoming shows where Kim and Eric will be playing.

Louder Than Milk‘s catchy, heartfelt music spans Americana, honky tonk, country, blues and rock. Most of the band’s songs are written by Andy Crowe, Jay Paget and Jeff Todd, who frequently combine for tight three-part harmonies. A sprinkling of original instrumentals, including tunes penned by fiddler Kim Patch, and a few choice covers round out the band’s grooving kaleidoscopic repertoire. The band was born in the Northeast and travels through American back roads. If they’re not back by morning, they must’ve got lost in the night. 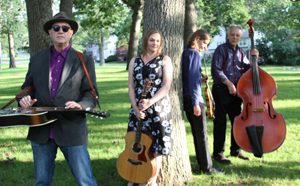 Andrew Innes and the Reluctant Ramblers

Andrew Innes and the Reluctant Ramblers plays a mixture of original music and trad country, Americana, early jazz and blues, waltzes and English country dance tunes. Guitar, fiddle, pedal steel and upright bass, and we even throw some musical saw into the mix.

a range of original, traditional and contemporary instrumental music, including old-time, blues, ragtime, bluegrass, waltzes, contra dance tunes, and English country dance tunes. See our collection of livestream videos. For a clue about the origin of our name, see the background of our photo.

a five-piece acoustic band that delivers an energetic and eclectic mix of bluegrass, country, folk, old-time, Tex-Mex, Celtic, blues and rock. Or as we like to say, fresh-baked roots music. Sign up to hear about upcoming Creek River String Band shows. Videos.

The Hay Pond Rounders is a loose affiliation of pickers, fiddlers, squeezers, kids, dogs and reprobates who come together each fall to make music up North.

The Boston Chamber Symphony, formed in 2012, includes current and former principals and other members of many area orchestras including the Mercury Orchestra, Brookline Symphony, New England Philharmonic, Longwood Symphony, Newton Symphony, Quincy Symphony, Melrose Symphony, Harvard-Radcliffe Orchestra, MIT Symphony, Boston University Symphony, and others. Avlana Eisenberg has conducted orchestras throughout the United States and in France, Germany, Austria, Scotland, Spain, Bulgaria, the Czech Republic, and Hungary. She holds a Master’s Degree in Orchestral Conducting from the University of Michigan and a Graduate Performance Diploma from the Peabody Institute, and was a Fulbright Fellow in Paris.